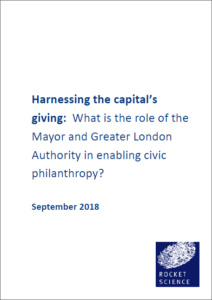 The GLA commissioned Rocket Science to undertake a review of civic philanthropy against a backdrop of extensive reflection about the future of civil society in the capital.[1]  At a time of political uncertainty around Brexit, the shrinking role of the state in people’s lives and increasingly complex social needs compounded by widening inequality of wealth, we detected high expectations of the Mayor of one of the richest cities in the world to take more of a lead.  The Review found less consensus around either the specific types of intervention or initiative the Mayor might take, or whether the concept of philanthropy, which is an anachronism to some, befits a modern and dynamic global city.

With the private sector increasingly seen as a key component of a civil society, the Review argues that the Mayor’s “Good Growth” agenda provides a modern narrative which will enable the GLA to elicit more sustained investment and “social value” than occasional contributions from businesses’ Corporate Social Responsibility (CSR) programmes. Reflecting the Mayoralty’s efforts to widen civic participation and community engagement, the Review shows how the GLA is already securing at least as much value from employers’ giving of time and expertise as money. However, it also found teams across the Authority working independently without clear strategic direction on how to engage corporate philanthropy, adopting largely opportunistic approaches to partner business.

The GLA’s eliciting social value from companies, is symptomatic of a growing trend particularly among some of the larger businesses we consulted of “moving beyond CSR” and the increasingly discredited notion of a tacit social contract in which businesses give something back to society in return for a “licence to operate.”  We detected signs of a different model of doing good in London’s private sector, one where businesses create social value by investing in the same activities required to generate profit – procurement; recruitment and reward; skills; research, development and social innovation – often by entering long-term partnerships with charities and civil society organisations.[2]

The GLA’s tapping into this whole-company approach is one corollary of the Mayor’s “Good Growth” agenda and is being underpinned by the introduction of new instruments like the Good Work Standard, as well as the Social Value Act.  Recognising the potential of business is also a recurring theme of the government’s new Civil Society Strategy which seeks to back “purpose-led” businesses committed to social or environmental objectives alongside making profit.

Such prominence given to business in debates about the future of civil society would not have been entertained even just a few years ago.  Changed perceptions of the role and potential of the private sector – from both inside and outside companies – is indicative of how boundaries between the private, pubic and voluntary sectors have become increasingly porous, and how so many of today’s social needs and challenges demand not just partnership working, but cross-sector solutions.[3] The Review identified scope for the GLA significantly to amplify this message, in effect re-purposing corporate giving for the 21st century and doing more to harness the social value generated by London’s businesses.[4]  Currently, however, connections and synergies between different programmes and projects funded by the GLA are being missed.  Partly this is a consequence of a new administration taking time to develop its strategic priorities, articulating its vision for civil society in the capital and refocusing inherited programmes, like Team London, on the themes of social integration, community engagement and social mobility.

Businesses consulted for the Review spoke of their frustration in having multiple contact points with the GLA and its lacking a coordinated, joined-up approach on corporate engagement.  As the definition of a modern civil society shifts and broadens to include business, the distinction between the GLA’s commercial partnerships (for which there is a dedicated team within the GLA) and business offers of a philanthropic nature will only become further blurred. One of the Review’s overarching recommendations is to establish a single point of contact at City Hall to bring far greater visibility and coordination to the Authority’s engagement with all sources of civic philanthropy, particularly those aligned with Mayoral priorities.

The recommendation that City Hall establishes a single point of contact for engagement with civic philanthropists is one of a series of actions and recommendations.

Harnessing the Capital’s Giving – what is the role of the Mayor and Greater London Authority in enabling civic philanthropy with all our recommendations can be downloaded here – Rocket Science – GLA Philanthropy Review.

For further information on the Review’s findings, please contact john.griffiths@rocketsciencelab.co.uk

[1] For the most recent contribution to this public debate see the Cabinet Office’s Civil Society Strategy, Building a Future that Works for Everyone, August 2018; Also Civil Society Futures is an ongoing national conversation about how English civil society can flourish in a fast changing world. Through a wide range of different media, Civil Society Futures has engaged those involved in all forms of civic action, including business.

[2] The future of doing good in the UK, Sonia Sodah for the Big Lottery Fund, 2017; See also chapter 4 of the Cabinet Office’s Civil Society Strategy, Building a Future that Works for Everyone, August 2018 “; Rocket Science Focus Group with large businesses, 30th April 2018.