The Review of Reviews Reviewed… 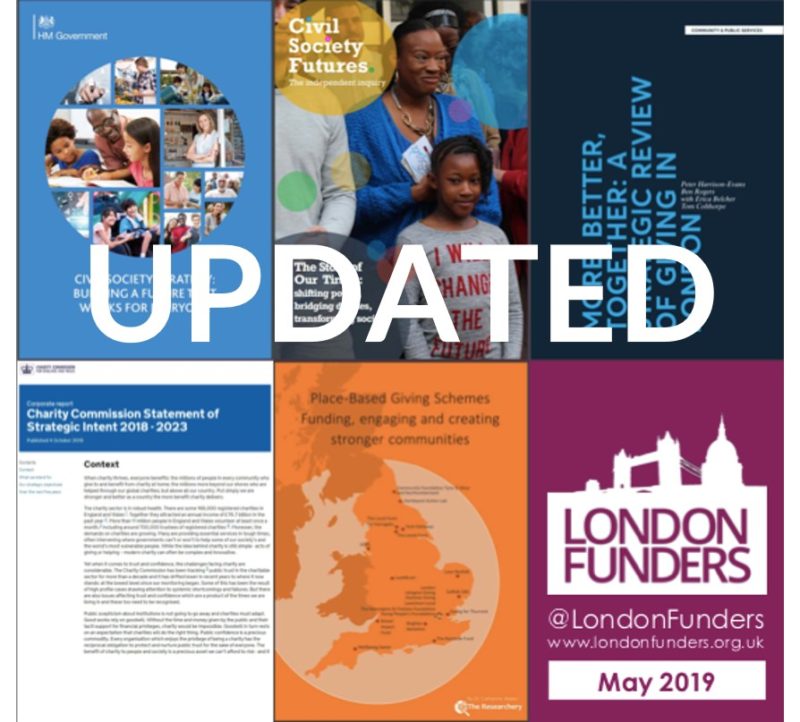 The past is constantly being reviewed and reinterpreted through the lens of the present. John Griffiths, the author of last year’s Review of Reviews looks back to see what we can still draw on from several pre-Covid strategies to inform our future planning for civil society’s recovery.

Recent weeks have seen our country’s history re-purposed as we search for lessons from historical precedent to explain our current predicament, selecting what moments to reference, or whom we choose to venerate or denigrate. As the government’s borrowing surpassed levels last seen during the Second World War, the Prime Minister needed little prompting to resort to Churchillian war-time rhetoric, speaking of the virus as the “hidden enemy” and summoning the “Blitz spirit” to foster social unity and community action in the face of the pandemic.

Whilst some question the appropriateness of these particular analogies, parallels with the social impact and legacy of the War are pertinent. Perversely, they also offer hope to those who see the 2020s, like the 1940s, as an opportunity to effect lasting and transformative social change.

Referring to how the First World War hurried on the Russian revolution, Leon Trotsky observed that “war is the locomotive of history.”  Another 20th Century Goliath, J.M. Keynes, argued similarly that it is “politically impossible for a capitalistic democracy to organise expenditure on the scale necessary to make the grand experiments [economic transformation] — except in war conditions.”  Indeed, recent histories of the last century provide considerable evidence that “the reduction in inequality that took place in most developed countries between 1910 and 1950 was above all a consequence of war and of policies adopted to cope with the shocks of war [1].”

It is these war-like conditions, brought on by our response to the coronavirus, which provide a window of opportunity to capture the zeitgeist, define a new form of social contract and rethink relationships between government, civil society and business.  And yet, as we begin to look for pointers and lessons from the pandemic, and find some succour from the community endeavour and social ingenuity born of the crisis, it is easy to overlook that many of the UK’s sociological failings had been laid bare well before Covid-19 shone an unflinching light on them.

It would be a mistake, therefore, not to go back to some of the detailed pre-Covid analyses of c21st civil society, and of how we already needed to change.  As another blog in this series has reflected, the UK’s social evils and levels of inequality in particular, which were in plain sight before the pandemic, are now accelerating.  Whilst the Age of Coronavirus may prove to be the “tipping point,” confirming our commitment to resource and enable a healthy civil society, we could also tip the other way. The stakes have never been higher.

It is barely eighteen months since the wide-ranging Civil Society Futures’ Inquiry reported its findings. The underpinning research report, Civil Society in England: Its current state and future opportunity was far from alone in failing to foresee a global pandemic, but it still presented a daunting analysis of other forces shaping our future, ranging from the fracturing of society and irreversible environmental damage, to transformational political and economic restructuring; from growing personal precarity, to increasing geo-political uncertainty and rising nationalism.

The Inquiry recommended a shared PACT, a set of principles for underpinning civil society’s future, which stemmed from its extensive consultations. The magnitude of the impact of Covid-19 may be such that we need to co-design “a different kind of conversation than the ones we have been involved in before.”  Nevertheless, as we potentially frame a new set of guiding principles for “building back better,” the PACT merits revisiting if only to learn whether we could indeed do better:

Four themes which connect the reviews also remain as relevant to our recovery from Covid-19 as to our healing of the UK’s entrenched social divisions, which Brexit initially exposed and the pandemic has now exacerbated:

Two years previously, just prior to the last Mayoral Election, London’s Fairness Commission argued for “the start of a new philanthropic age . . . an exemplary social philanthropic effort at a city level to focus on the challenges facing London’s poorest citizens.”  Four years on, as we try to recover from the biggest disruption to civil society since the War, the time is surely now for London’s leaders to crystallize that “Peabody Moment.”

John Griffiths is a Director of Rocket Science and a Trustee of London Funders, a membership network for funders and investors in London’s civil society.

[2] This statement from the Cabinet Office’s Civil Society Strategy (2018) has echoes in New Local Government Network’s (2019) thesis expounding the “community paradigm” of empowering and resourcing communities to create a non-hierarchical culture of cross-sector collaboration.