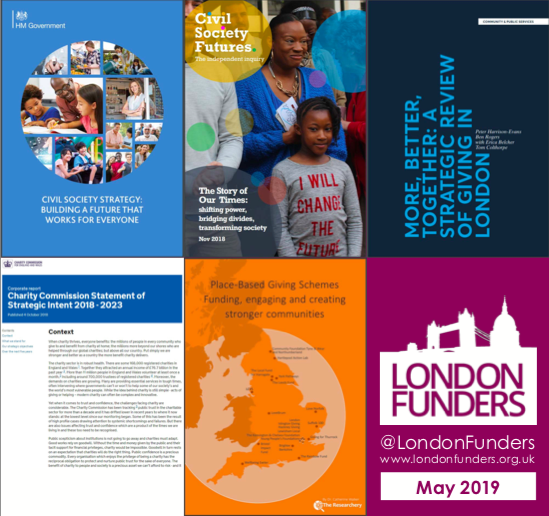 To coincide with London Funders’ publication of our Review of Reviews, Rocket Science’s London Director, John Griffiths, reflects on what Brexit really means for UK civil society and some implications for its funders . . .

These words of the metaphysical poet and one-time Dean of St Paul’s Cathedral, John Donne, have never had more portent as we prepare to leave the European Union. What on the morning of 24th June 2016 might have seemed a knee-jerk act of political protest, has exposed deep-seated socio-economic divisions throughout the land, as well as between the capital city and the rest of the country. Recent analyses of the implications for the UK of the Brexit vote show that this is not a time for London’s “splendid isolation.”

The UK’s decision to leave the EU proved to be the cue for a lengthy bout of self-analysis and enquiry. The last two years have seen an outpouring of reports looking at different aspects of the condition and future of Britain. They explore the changes required to our democracy, education and economy in order to confront the biggest challenges facing the country today. Inequality, the focus of a new 5-year inquiry by the Institute of Fiscal Studies, is consistently identified as the greatest.

What is absent from these assessments is any significant contradiction to the narrative of an irrevocably shrunken state unable to cope with rising demographic pressures and social demand. The contract which underpinned the welfare state for over 70 years appears broken. That in exchange for taxation and personal responsibility government will provide for its citizens “from cradle to grave”. In their search for an alternative system, the reviews share a certain optimism that a more inclusive UK civil society is key to achieving a new form of lasting social settlement. One no longer synonymous with a “third sector” but also embracing business.

Another recurring theme of these analyses is the growing significance of place as the focus for policy making and social innovation in communities. Following more than two decades of devolution and localism, the government’s Civil Society Strategy (2018) gives substance to the belief that “people best placed to drive forward local and sustainable economies are those who live, work and do business in them.”

This is a policy trend which is likely to strengthen following our eventual exit from the EU. Once government defines its idea of “double devolution” and certain powers and funds are repatriated. Several high-profile foundations, as well as the tellingly re-named National Lottery Community Fund, are already taking a more place-based approach to their funding in order to stimulate social action, coordinate investment and unlock local assets. They seem to be tapping into the popular urge to re-establish feelings of community in an increasingly atomised society, one in which people look to place as a way of reaffirming their identity and a sense of belonging.

Understanding the current zeitgeist, of which the process of Brexit is more a symptom than a cause, offers some pointers to funders’ future priorities. In what is an increasingly fractured country, there are two fissures which stand out.

One is the growth in both income and wealth inequality between the richest and the poorest in UK civil society, indicators which are particularly pronounced within London. The other is the increasing divide between capital and country.

Debates about the future sustainability and fairness of London have tended to focus on the striking narrative of “a tale of two cities.” This can hide the degree to which there is also a widening schism between London and the rest of the country. Analysis of the geographical differences in the result of the 2016 EU referendum, for example, has identified the mounting resentment about the capital’s preferential policy treatment, the disproportionate levels of public spending and its growing levels of individual and corporate wealth. Differences in personal wealth, and hence individuals’ life chances, between the capital and the rest of the UK are the biggest of any country in Europe.  As the Social Mobility Commission has pointed out, children going to school in Westminster and receiving free school meals are five times more likely to go to university and then on to good jobs in London, than children elsewhere in the country.

An important corollary of forums like London Funders’ providing a safe space for collaboration, is that their members appreciate the opportunity and value of being challenged. These reviews’ widening of the parameters of a modern civil society, to include business when it acts for a social purpose, means that a forum’s membership needs to reflect the cross-sectoral nature, the range of place-based and community interests, and the sheer diversity of civil society.

The risk is that narrow or unrepresentative membership creates an echo chamber, with insufficient capacity or courage to address fully the challenges set out, for example, by Julia Unwin’s Inquiry, which envisions UK civil society thriving only as result of our collective willingness to redefine difficult concepts of Power, Accountability, Connection and Trust.

John Griffiths is a Director of Rocket Science and a Trustee of London Funders, a membership network for funders and investors in London’s civil society.